State Route 536 in Mount Vernon, Washington was designated Memorial Highway in 1931 in memory of fifty men from Skagit County who died during WWI.  At that time, Harold Wells, a young man just getting started in the nursery business, now known as Wells Nursery, brought 180 American elms 8-10 feet high and bare root from Iowa by train.  The trees were sold for $3 each and planted along both sides of SR536 beginning in Mt. Vernon.

In the early 1950s, only twenty years later, the state highway department widened the road and installed utility lines.  In doing so, they removed most of the elms leaving only three of the original trees.  In 2018, two of the final three trees located in front of The Net Drive-In had become unhealthy and were removed.  The final Memorial Highway tree still stands three hundred yards east of Avon Allen.

In 2015, in memory of the sacrifice of these fallen soldiers and sailors, the Skagit County Master Gardener Foundation launched an initiative to replace the elms along Memorial Highway.  Five elms adjacent to the Discovery Garden were the first to be planted. The Master Gardeners were soon joined in the effort by Rich Sundance and his daughter, Emma, who reached out to the Skagit community and tirelessly campaigned for funds to support the initiative.  All 50 elms are now replanted along Memorial highway.  Each tree has a granite plaque placed next to it for one of the fifty men.

The memory of their sacrifice has been restored, and each plaque gives credit to those who supported the individual memorial.  For example, one such plaque honoring a Skagit soldier who died is from Judy Baker.  She is a long time Master Gardener.  Her father, a Lieutenant, fought in the British Army in World War I.  He survived four long years of heavy combat in France before being shot down and captured in early 1918. He was returned after the armistice to England, and lived quietly well into old age.

Many were involved in replanting the elms to allow future generations to learn about the sacrifice these 50 young men made for their country.  Specifically, the Skagit County Master Gardener Foundation and its members decided to sponsor the initiative, Emma and Rich Sundance were outstanding community partners, Dike District 1 gave permission to plant 24 trees on their property, Jim Barborinas’ Urban Forest Nursery provided the trees at a significant discount, and Lefeber Turf Farm had the will and the space to plant many trees.

977 Skagit County men joined the Army, Navy and Marine Corps in that war.  Of these men, 50 never came home.  They were cut down by machine gun fire, by barrages of heavy artillery, by torpedoes at sea, by snipers in the forests of the Argonne, Belleau Wood, and Soissons.  They never saw their hometown or the fertile fields of Skagit County again. It is our obligation as citizens to remember them and all others who have served or who have fallen in service to our country. 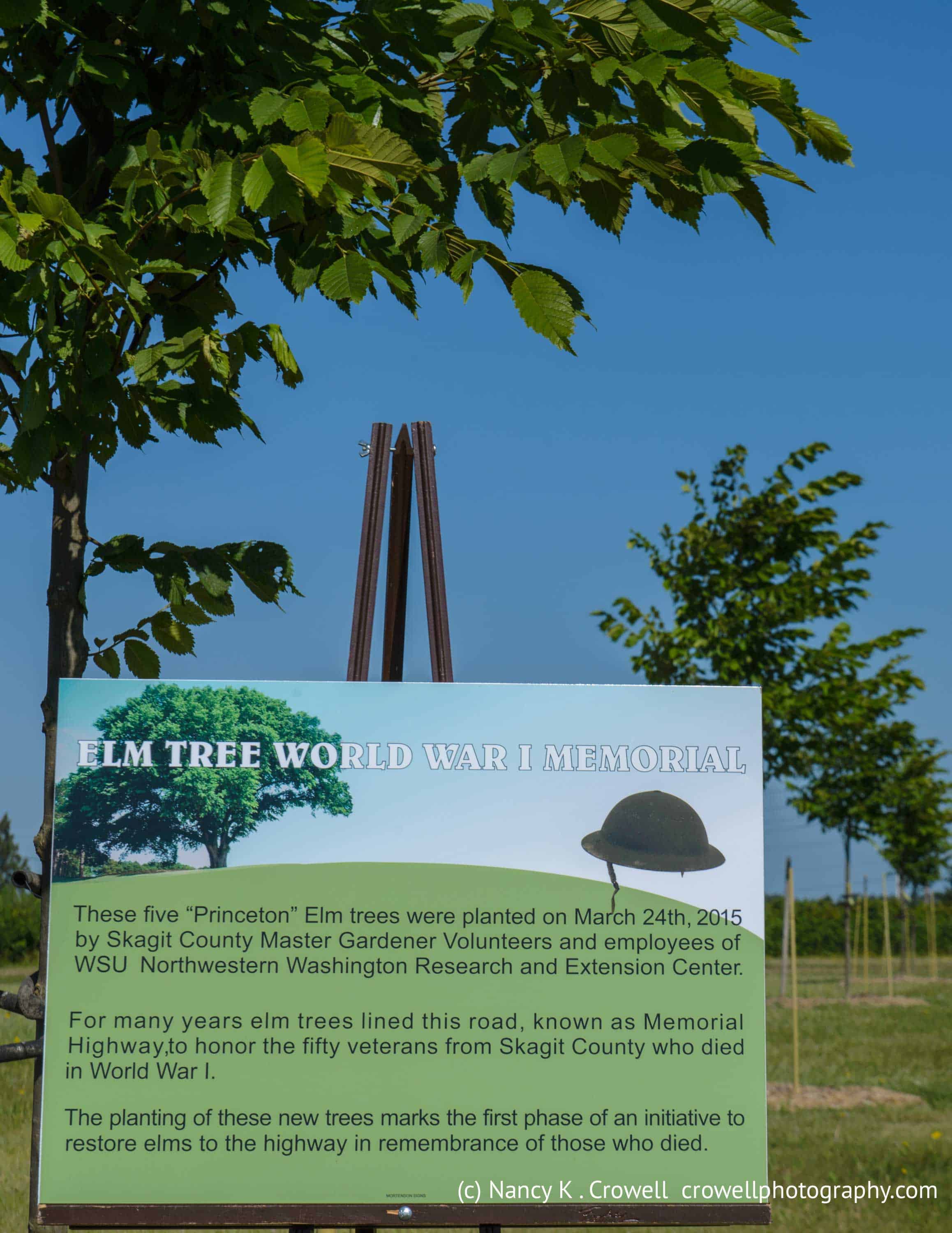 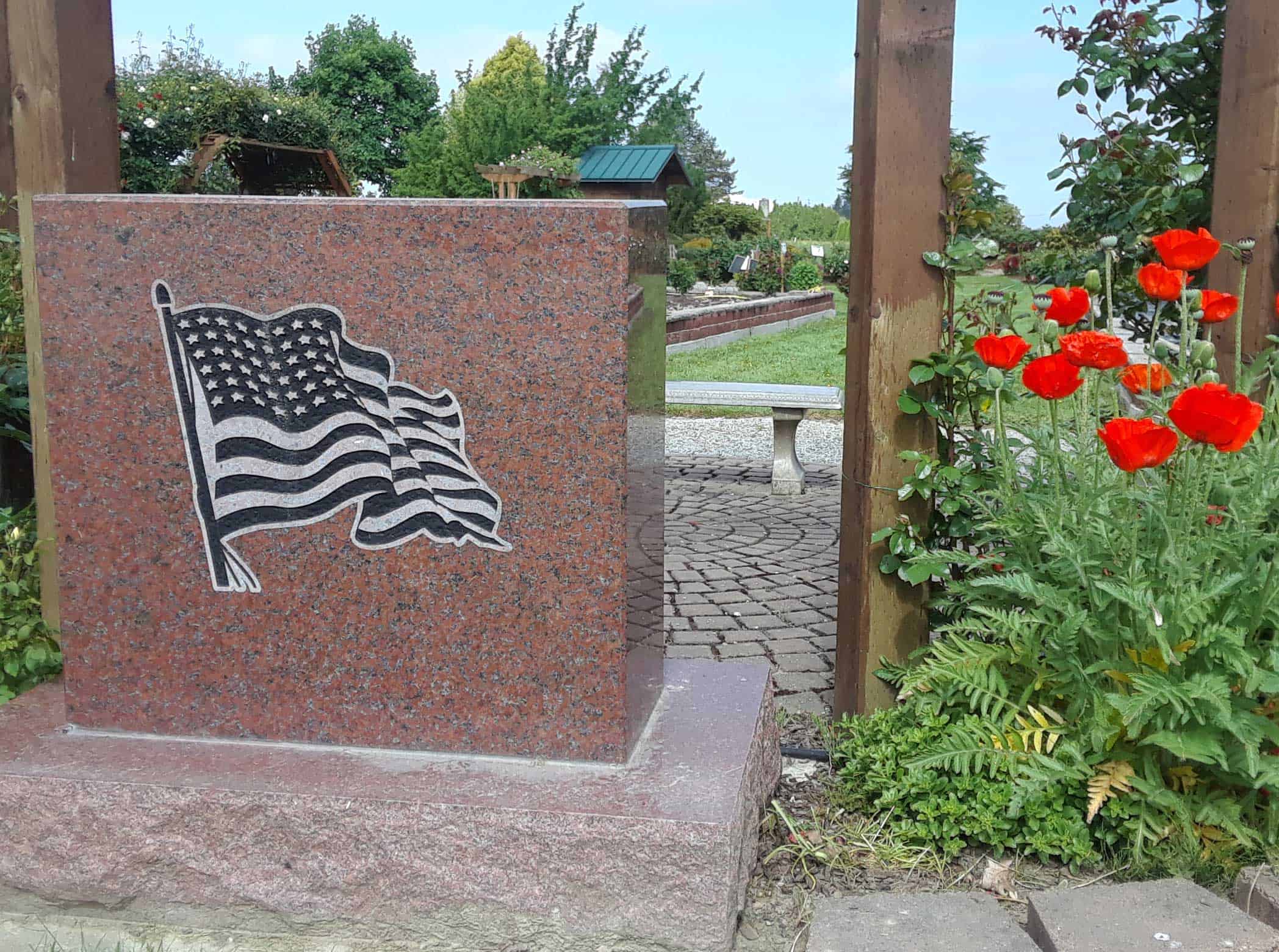 This marble monument, located in the Rose Garden, was dedicated in 2008 to honor those who served and died in WW1. It was donated by Kern Funeral Home as a tribute to LeRoy Anderson, a WW1 veteran, who led the effort to designate Hwy 536 as Memorial Highway in 1931. 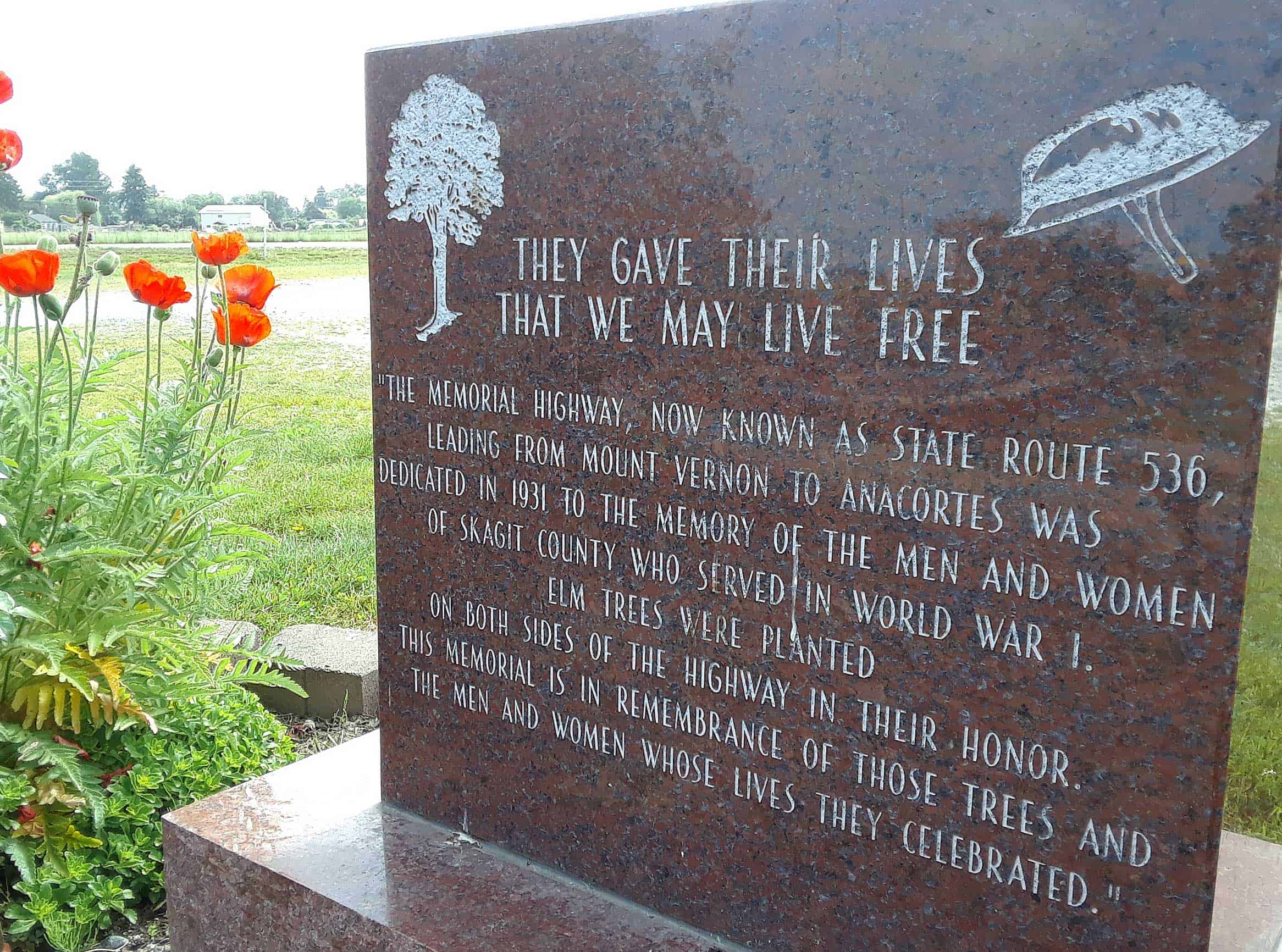